Turning to LED can do so much more than rescue a grower’s soaring energy bills. But it does do that too. Nathanael Dannenberg, commercial leader, horticulture for Signify in the UK & Ireland, runs through the common myths and confusions surrounding LED – and many of the advantages… some which won’t have crossed your mind yet. It’s time to stop asking ‘why?’, and begin saying ‘why not’.

Sometimes, it’s easy to think we know the answers. But this stops us asking questions. I often hear growers say that LED is out of reach financially - or that it won’t offer the same fruit quality as naturally grown produce. So let’s unpick those assumptions and take a look at how LED could be the answer to the questions you didn’t know you needed to ask.

It’s all about the money

If you are a grower who is not currently lighting, the energy crisis might well be putting you off doing so. But switching on the lights doesn’t need to start with full year-round illuminations. It might be that season extension is a better option to begin with. If we take strawberries as an example, season extension will require 55% less light than if you had full winter production. It’s not only a cheaper start but season extension also allows you to grow your business through the ability to charge higher product prices and to compete for large contract deals.

If you are already using lights such as high pressure sodium (HPS) ones, LED offers massive energy savings of close to 50%. And with ever-increasing energy costs, the payback period has dropped significantly in most cases.

If you are switching from HPS to LED, your payback can typically be less than three years. We also offer financing of up to five years so, on occasion, growers can actually run a cash surplus, freeing up funds for further investments.

If you’re looking to embark on lit production for the first time, your payback period will likely be around five years. Again, we have payback models that factor in energy and product cost fluctuations and make a stronger case for switching.

But what about the quality?

Specialism is the game-changer

At Signify, we believe light quality - and the quality of plants it helps produce - is of fundamental importance. It’s for that reason that we  have a team of plant specialists who dedicate themselves to specific crops, drawing knowledge from all the markets we operate in, so that they are able to give specialist, expert advice to growers on what works best for them.

Our light recipe consists of three key ingredients: the light intensity, the spectrum and the photoperiod (that is, the hours of lighting).

Whereas HPS has only one spectrum, with LED we can tailor the percentages of PAR (photosynthetic active radiation) according to the plant - even down to the variety. This means the plant gets the absolute best lighting treatment to maximise the investment. In fact, our growers repeatedly tell us their winter crop quality is on a par with, or better than, their summer one.

By using artificial light in the winter, you’re removing one of the variables you have to contend with over the summer. Because the light the plants receive is consistent, growers tend to find their winter crops are, at the very least, as good as their summer crops in terms of quality and consistency - if not better.

In theory you can grow anything under lights but, ultimately, some crops are more profitable than others. Lit tomato production is probably the most mature, in terms of adoption, but herbs, lettuce, strawberry and cucumber certainly aren’t too far behind. We expect peppers and blackberries to be the next crops to be lit - we’re doing trials in the UK and the Netherlands on those.

Our plant specialists support growers with more than just lighting knowledge. They can help develop your business with their expertise of other factors that will also impact your growing strategy such as climate and irrigation.

If LED allows you to be an all-year-round grower, then it also enables you to offer full-time employment rather than purely seasonal work. This brings huge benefits in terms of workforce efficiency as you can keep a core of well-trained staff which can be ramped up during peak periods. Having this option to maintain a base level of staff resource has proved a significant boost for some growers, especially given the Brexit-induced labour shortage of recent years.

Signify is a carbon neutral company, so growers can feel confident that the lights they are using are produced as sustainably as possible. It’s even better  if your own energy source is renewable, even though your energy consumption will be reduced by around 50% if they switch from HPS to LED.

There’s a growing demand from both shoppers and supermarkets for British produce that shows no sign of waning. In fact, we’ve been asked by retailers to support growers in implementing winter-lit production. The ability to supply year-round British crops puts you in with a chance to win higher value supply contracts.

And if we look to the rest of the world, we see water shortages caused by over-extraction in regions such as Donana in Spain and in Morocco that supply our supermarkets during the winter. British growers generally have an over-supply of water and are already highly efficient in their use of it, with most recycling rainwater, giving another good reason for supermarkets to buy British all year round. (Sun and warmth we could do with a bit more of!)

Family-owned Belgian grower Welroy Fruit produces raspberries, apples and pears but it is the company’s strawberries that are its most important crop, with between 200 and 250 tons grown between March and December. Founded in 2005, Welroy has always kept up with new developments and is committed to working practices that are eco-friendly and efficient.

After a long cold winter, consumers are eager to get their hands on fresh, sweet strawberries that signal the start of spring. For Welroy, March sales are crucial and around 60% are sold to local markets (via outdoor farmer’s markets, local supermarkets and fruit vending machines) where a higher margin can be charged  than in the fruit auctions to retailers.

But competition is fierce, with all strawberry producers coming to market at the same time.

Welroy wanted to get a headstart on its rivals: its aim was for its Sonata strawberries to arrive earlier at the more profitable markets and also to grow sweeter strawberries than are usually available in early spring.

Welroy looked into the options of both high pressure sodium (HPS) and LED grow lights for its two greenhouses which span 5000 square metres. Having evaluated the costs and benefits of each with Signify (then Philips Lighting), its horticultural partner Agrolux and the Delphy agricultural institute, the results were somewhat surprising.  “Usually HPS lighting would be the most economical option for our size of greenhouses, but calculations showed it was more economical to install a

In the summer of 2017, a full LED system with Philips GreenPower LED toplighting was installed in the two greenhouses.

Fruit planted in the autumn of 2017 for the December harvest beat expectations - in terms of sweetness, fruit quantity and plant health. LED was helping the grower achieve consistent production and gave Welroy the chance to get its Sonata strawberries to market three weeks earlier than the rest of the competition. That, says Royen, would “give us a huge advantage and will help us further build our local customer base.” 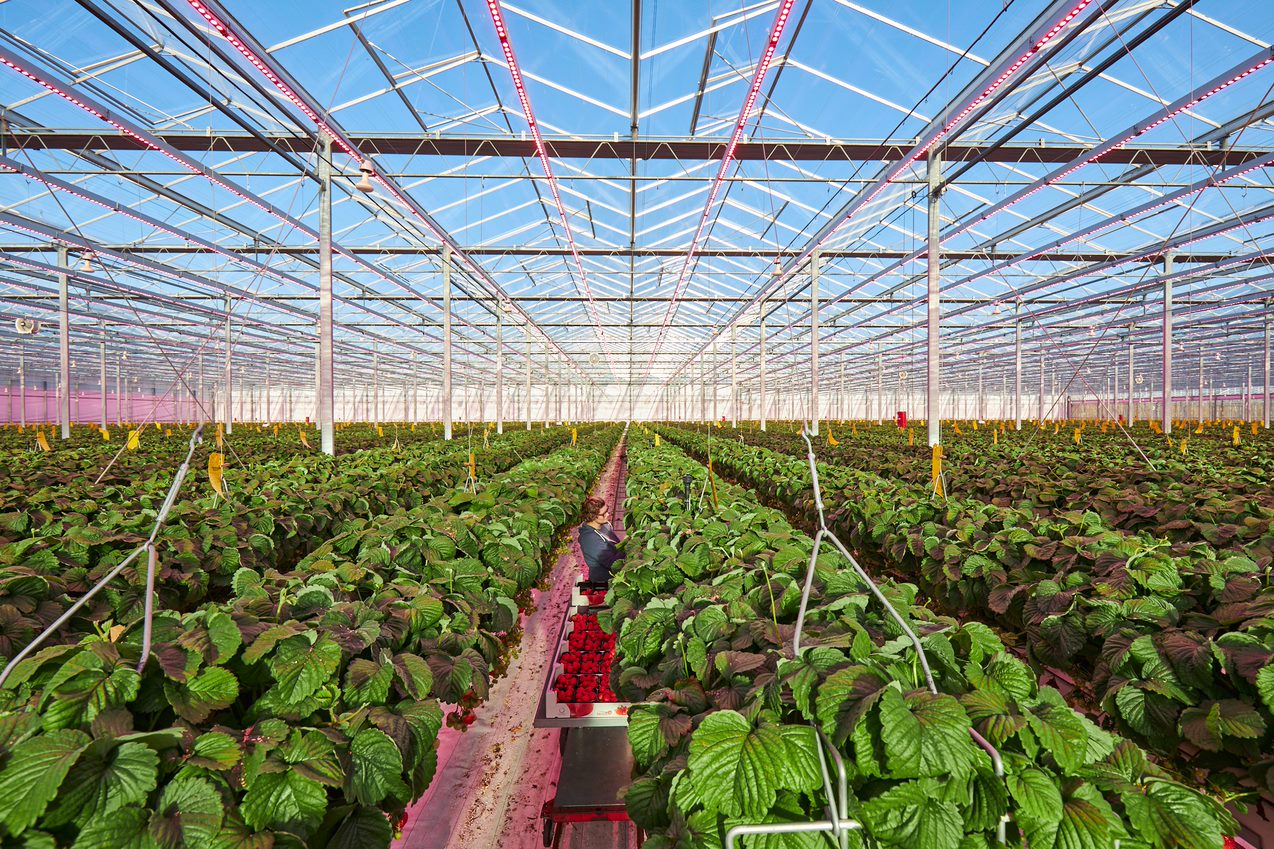